'God particle' is only a state of 'Superball' -2

Before reading this post, read '"God particle" is only a state of "Superball"'.

There is Heisenberg Uncertainty Principle (read below). Why does this phenomenon happen? The reason is because an electron (superball) never moves as I’ve argued it in the prior posting. Furthermore, it’s almost impossible that an observer finds out the ‘moved’ same electron because this particle status changes instantaneously and constantly – it might change to a wave state (invisible).
http://en.wikipedia.org/wiki/Uncertainty_principle
Uncertainty principle

I can finally say that the existence of 'God particle' is a fundamentalism of religion for the standard cosmological model’s advocates, and this research generates big economic effect – CERN's annual budget of around one billion Swiss franc (US$ 1.15 billion) – for scientists, besides gaining fame and swindle Nobel Prize. It means this is an economic benefit rather than scientific interest for the scientists.

Symphony of Science - 'The Big Beginning'

There are other facts about the true motives of CERN’s LHC. The reasons are for antimatter production, which the movie, 'Angels and Demons' showed and development of high power directed energy weapon such as ray gun (read below).
http://en.wikipedia.org/wiki/Directed-energy_weapon
Directed-energy weapon

In addition, the accelerated particle beam collisions by the LHC don’t make antimatter as the movie above showed. Only the powerful electromagnetic acceleration system (magnetic field generator) installed in the LHC can make it.

You need to refer to the incident of ‘Philadelphia Experiment’ for understanding it. The destroyer Eldridge might change to antimatter due to be exposed to a strong electromagnetic field that the large tesla coil generate and might go into another universe. Moreover, antimatter can generate strong light but it has no capability to explode as this blog’s posts have argued. I’ve been deceived by the disinformation.

However, swindle Ummite alerted that the LHC is a serious threat for the human. If this isn’t false, what threatens us must be the electromagnetic acceleration system of the LHC. Imagine the incident of Eldridge. We should stop this giant useless piece of junk immediately.

See also the symbol ('CERN' in circles is 666) and the objects of CERN below. 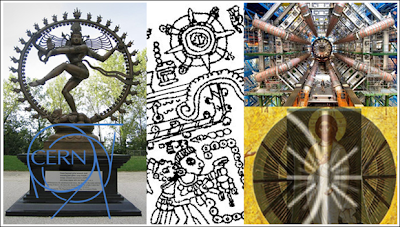 Posted by Nobuo Ishiwata at 3:34 PM

The new ice age has already come on the Earth. Big chaos began for human evolution. It results in the extinction of the current human.

All posts on this blog are related to the human evolution. So it’s not easy to understand just reading the independent post. Read first posts for understanding it.

The first page of the posts

Is the human evolution event a fiction? Truth is crazier than a fiction.

Conspiracy (by ‘They’: real global handler)

'Network of the soul'

'This world' and 'That world' ('Life after death')

Does the solution to ancient historical mystery make sense?

I argued that facts, historical records, and archaeological-historical resources are creatures of our crowded consciousness  in the post ...